Hey there, Rick here. Welcome to my writing world, where true crime and thriller fiction are #1. Of course, I wasn’t always an author—my career began years ago as a Sheriff Deputy in Indiana. Since then, I’ve served my community as a detective in a variety of fields: fraud, violent crime, sex crime, juvenile crime, burglary, and, finally, homicide.

I spent most of my career working third shift and saw enough there to drive me to write; my first attempt at writing, The Monkey Boy Gazette was born during these out-of-sight-out-of-mind late hour shifts. My first publication was one page, though an anonymous one, and primarily served to roast fellow officers, politicians, or anyone else who crossed my mind (or myself). After seven years of successful circulation (through several police agencies—including the FBI Academy in Quantico, Virginia) I made the mistake of criticizing a mayor and drew the attention of the Vice Squad, who encouraged me to shut that project down. Eventually I found myself teaching at a local college and changing my writing focus. The result was BLOOD TRAIL, the true story of serial killer Joseph Weldon Brown, followed by the fictional Detective Jack Murphy thriller series.

Along the way, I’ve also worked in investigations, internal affairs, picked up a Sergeant promotion and earned graduate degrees in Public Administration and Criminal Justice. In the end, I am glad that those experiences brought me to where I am today. Writing has been cathartic after a career in law enforcement. No one is ever harmed in the making of my books; I can walk away. Nothing to see here, folks.

When I’m not typing away at my desk you can find me spending time with my two grandchildren or relaxing with my wife and our dogs in our Tennessee home. In my downtime, I love to read and enjoy the view from my hot-tub with a bottle of 15-year-old Glenmorangie Scotch (or any Scotch that starts with a Glen, really).

Some more fun facts about me for the curious reader:

Rick Reed is the author the true crime novel Blood Trail, the account of his capture of serial killer Joseph Weldon Brown and the detective Jack Murphy series, which draws on Rick’s 30 years of experience as a detective for the Evansville, IN police department.

Rick is available for presentations or readings by contacting his publicist, Michelle Forde, at Kensington.

An Interview with Suspense Magazine

Suspense Magazine (S. MAG.): As a true crime writer, do you feel a certain sense of creative freedom in stepping into the world of fiction?

Rick Reed (RR): I didn’t originally start out to be a true crime writer, but the opportunity to write “Blood Trail” presented itself and ‘that was that’. Writing true crime is very restrictive because you have facts to work with and you have to stay within those facts. Having the freedom to create your facts, to ‘design’ characters to play the parts you give them, is exciting.

Read the rest of the interview in the November 2010 edition of Suspense Magazine.

Recipe for a Mystery

What others are saying about Rick Reed’s books

“Whew! The murders are brutal and non-stop. Heads roll (literally) as detectives Jack Murphy and Liddell Blanchard track after a pair of paid killers without a conscience, through a political maze of lies, deception and dishonor that leads to a violent, pulse-pounding climax.”–Robert S. Levinson, author of Finders, Keepers, Losers, Weepers, Phony Tinsel, and A Rhumba in Waltz Time

“Reed…gives the reader a genre story worth every minute and every penny spent.” – reviewer Joe Hartlaub on BookReporter.com 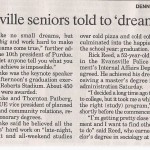